The Saturday Resurrection of Jesus 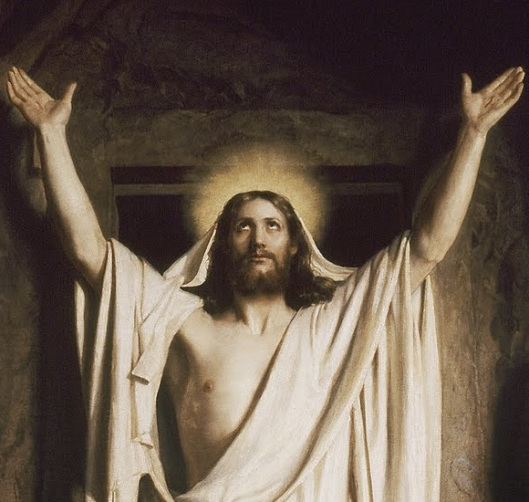 In John 20:1, we learn that Mary Magdalene, traveling alone, made her way to Jesus tomb, “while it was still dark” on the first day of the week (i.e., “Sunday”), only to find it empty. But we also learn from Matthhew 28:1 that Mary Magdalene, in the company of the “other Mary,” returned to the tomb, at daybreak; making it Magdalene’s second visit there. (And a third  “just after sunrise” if we take Mark 16 into account.) It is then when the pair is said to have encountered a lone angel sitting atop Jesus’ burial stone.

Since Mary Magdalene’s earlier visit in John’s gospel took place “while it was still dark,” and her second visit takes place “at dawn,” it means Jesus would have to have arisen from the dead  on Saturday, not Sunday—this, despite John 20:1 stating it was “early on the first day of the week” when Mary first made her way to the tomb.

The Greek text of Matthew 28:1 actually reads: τῇ ἐπιφωσκούσῃ εἰς μίαν σαββάτων. Literally, “It being dawn toward   [the] first [day] of [the]* week.” (Emphasis mine.)

We must remember that the Magdalene had traveled back to Jerusalem to tell Peter and the Beloved Disciple that Jesus’ tomb was empty, then returned with them both in tow to search for Jesus’ body. She then, once again, returned to Jerusalem. The time needed for such back-and-forth trips, in addition to her tomb activities, plus  the time needed to gather “the other Mary” and then return to the tomb for a second time at daybreak, simply does not permit a Sunday resurrection. There is simply too much traveling back and forth and other activities between Mary’s first visit in John 20:1 and this second visit at the crack of dawn in Matthew 28:1 for Jesus to have arisen on Sunday proper.

Fact is, the claims of a Sunday resurrection actually rest on nothing more than Church doctrine and dogma. There’s no empirical evidence whatsoever to positively demonstrate that Jesus actually arose on Sunday rather than Saturday. There were no eyewitnesses to the event. And nothing in the gospel records can actually certify a Sunday rising. That being the case, we should honestly rule the Resurrection a Saturday  event rather than a Sunday one (assuming, for the sake of argument, that there even was  a “resurrection”). The latter being more of a matter of Church tradition rather than a matter of fact. And so, until proven otherwise, the Saturday resurrection stands. There is simply no irrefutable proof indicating otherwise.

Previously we wondered why both Matthew and Luke changed Mark’s “After three days” to “On the third day” in their respective gospels. A vital clue, perhaps, is to be found in the text of I Corinthians 15:3-4. where the “apostle” Paul declares :

The question is: What  specific verses of “scripture” is Paul actually referring to? His claim has confounded bible scholars for centuries due to the fact there are no Old Testament passages specifically stating any such thing. Nonetheless, Paul may have had in mind Hosea 6:2-3. where we read:

“He will revive us after two days; He will raise us up on the third day, That we may live before Him. Let us acknowledge the Lord;
let us press on to acknowledge him.
As surely as the sun rises,
he will appear.”  (NIV)

Knowing the propensity of the gospel writers to try and tie Jesus to Old Testament “prophecy” in as many ways as possible, Hosea 6:2-3 may have been just too  irresistible for Matthew and Luke to pass up and not try and conform it to the death of Jesus in some fashion.

Best bet is that Hosea 6:2-3 was seen by both Luke and Matthew as yet another fulfilled prophecy regarding Jesus that could be extracted from the Old Testament, and so they decided to alter the text of Mark accordingly.

Veritable proof of the likeliness that this did indeed occur lies in the fact that not only have both Jerome and Martin Luther believed Hosea 6:2-3 to be Old Testament prophecy at work, but so too many modern  day evangelical Christian writers! A survey of Bible commentaries reveals that list to be rather extensive. We provide a very brief listing of some of those commentators here. So there can be little doubt that both Matthew and Luke deliberately altered Mark’s wording in order to see in the death of Jesus, the fulfillment of  Old Testament prophecy―this, despite the fact that Hosea 6:2-3 is clearly referencing the nation of Israel and not a lone individual.

The “On the Third Day” Tradition

Earlier, we mentioned that nowhere in the gospels does Jesus arise on the “fourth” or “fifth” day; a fact that Christian apologists claim “proves” Mark 8:31 must be interpreted as meaning ON the third day. And today, the “third day” tradition is practically carved in stone. But that is NOT what the text of Mark 8:31 maintains. Mark clearly  indicates Jesus would arise three days AFTER his death:

He then began to teach them that the Son of Man must suffer many things and be rejected by the elders, the chief priests and the teachers of the law, and that he must be killed and AFTER three days rise again. (NIV; emphasis mine)

This is also the case in Mark 9:31, 10:34, Matthew 12:40, and 27:63. The Christian cannot simply choose to ignore verses of Scripture that do not “square” with their religious world-view. That’s being dishonest with the texts, and consequently, not dealing with the “truth” in a forthright manner. A hallmark of the Christian religion is that its members are to always tell the truth, not flee from it.

We have seen that there is no “legitimate” way Christian apologists can reconcile the contradiction between between Mark 8:31 and Matthew 16:21 and their corresponding parallel passages. So as it stands, not only do the two passages remain in a state of  irrefutable contradiction, but Mark 8:31 also puts on the lips of Jesus a “prophecy” which has proven to be patently false. And, in turn, proves Luke 1:37 ‘s declaration, “No word from God will ever  fail,” to be untrue as well. There is simply no escaping this fact.

We’ve also reached the conclusion that Jesus did not arise on Easter Sunday, but during the evening of Saturday instead―assuming that there even was a “resurrection.” The preponderance of evidence for Saturday is just to strong to deny; and the ramifications of which are yet to be fully determined.

Church tradition will, of course, invariably hold sway more often than not. The faithful will continue to believe what they want  to believe. The Christian apologists will hold firm to tradition. But that doesn’t make their beliefs “true,” nor tradition right. Neither faith nor tradition prove anything  true. Only the truth does that.