The Mission of Jesus – Part II 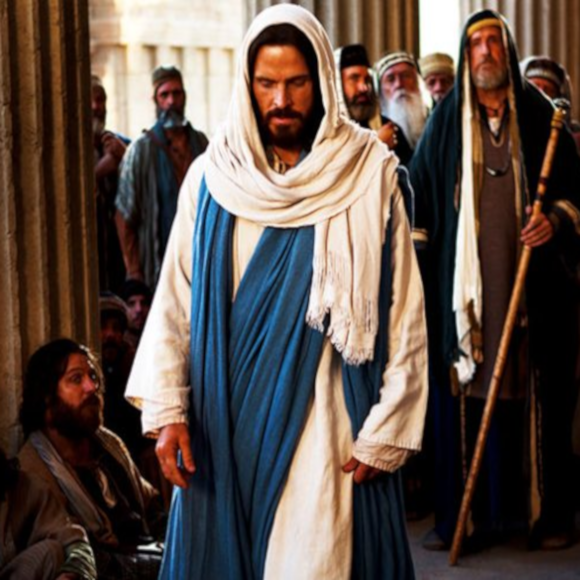 “I was sent ONLY unto the lost sheep of the House of Israel.”[1]

As we have seen, God the Father decided that God Jr.’s mission was to minister to the Jews alone. There is nothing in Jesus’ actions while on earth that would lead us to believe otherwise.

An examination of Jesus’ miracles for the benefit of Gentiles—of which there were only two according to the gospel record—shows that in the first instance, the Centurion whose servant was miraculously healed, saw to the construction of a Jewish synagogue in Capernaum.[2] In the second, sheer doggedness and a quick wit on the part of a Gentile Syrophoenician woman was key in Jesus relenting and performing a miraclulous exorcism for her daughter, albeit reluctantly.

Mark was the first written gospel. And in Mark 7:27 Jesus tells a begging Syrophoenician Gentile woman who wants Jesus to exorcize her demon-possessed daughter, “First let the children eat all they want,”…“for it is not right to take the children’s bread and toss it to the dogs.”

Christian apologists have jumped all over Jesus’ use of the word “first” (πρῶτον – “prōton) here as proof that the God Jesus did intend for there to be a mission to the Gentiles after all. Jesus flatly states that the Jews must first be “fed,” implying that the Gentiles would be ministered to secondarily. Only that they must wait their turn.

Christian academics, however, have pointed out, “first”  in Mark 7:27 is being expressed as an indefinite period of time with no set date for its conclusion. Robert H. Gundry, for example, sees the verse as follows :

“First” implies the woman’s daughter may receive the salvific benefits of God’s kingdom at a later date. But the next clause, “for it is not good . . . to take the bread of the children [i.e. the time and effort needed to teach my disciples] and cast it to the little dogs [i.e. to Gentile children like the woman’s daughter],” makes the delay so indefinite that in effect Jesus is denying the woman’s request.”[3]

Deeming Mark 7:27 a sign of a future mission to the Gentiles also fails to take into account that Jesus, during an only three-year ministry, could never have reached out to all the Jews in Judea and beyond. Moreover, an omniscient God would be keenly aware beforehand that such a task was utterly impossible given the way “preaching” was conducted at the time. Countless Jews would never have even heard of Jesus by the time of the crucifixion, let alone be swayed by his words. And a Messiah who gets Himself crucified? What Jew in their right mind would accept that as a sign He was their “Redeemer”?

Furthermore, an omniscient God the Father would also have known that only a relatively few Jews would be converted. So, the obvious question: Why wasn’t a mission to the Gentiles part of Jesus’ mission work right from the start?

The fact that Jesus believed that the establishment of God the Father’s “Kingdom” was about to occur at any moment helps to explain why no mission to the Gentiles was undertaken by Jesus’ or any of the twelve apostles during, or shortly after the crucifixion.[4] Ironically, the “apostle” Paul also believed in the imminent establishment of God’s kingdom.[5] Jesus, in fact, proclaimed it would occur within the lifetime of His immediate disciples,[6] as did Paul. And both spoke of it with the greatest of urgency; as did John the Baptist. (There will be more on Paul later in this article.) That being the case, a mission to the Gentiles on the part of Jesus and the Apostles would be pointless. There were far too many Jews that needed to be converted. And there literally wouldn’t be enough time left for a mission to the Gentiles before the firmly-believed imminent establishment of God’s kingdom was to take place.

A further note: Jesus never expands on His use of the word “first” or even  hints at a possible mission to the Gentiles anywhere in Mark’s gospel.  Matthew, curiously enough, records Jesus as telling the Syrophoenician woman, “It is not right to take the children’s bread and toss it to the dogs.” The word “first” is nowhere to be found in Matthew’s version of this incident— despite Matthew 24:14 and 28:16-20.

Luke makes no mention of this incident at all.

So it is safe to say Jesus was in no way signalling  the establishment of a mission to the Gentiles—at least not according to the earliest written gospel, the Gospel of Mark.

[4] Cf. Matthew 10:23; 24:32-34,  Where Jesus tells his disciples that they will see the signs of the end times. He was speaking directly to his then-living disciples and not to modern man.

[6] In Matthew 26:63-64, for example, Jesus tells the Jewish High Priest, Caiaphias, “you will see the Son of Man sitting at the right hand of power, and coming on the clouds of Heaven.” Obviously, Caiaphas saw no such thing. See also Matthew 16: 27-28.

One thought on “The Mission of Jesus – Part II”