Jephthah’s Daughter: A Bible Story of God and Human Sacrifice – The Conclusion 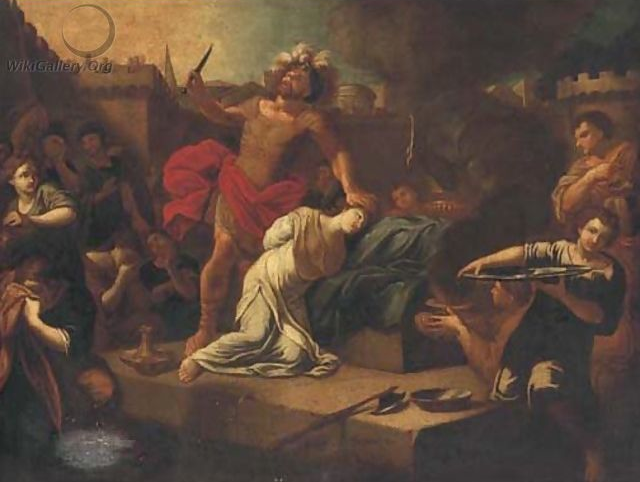 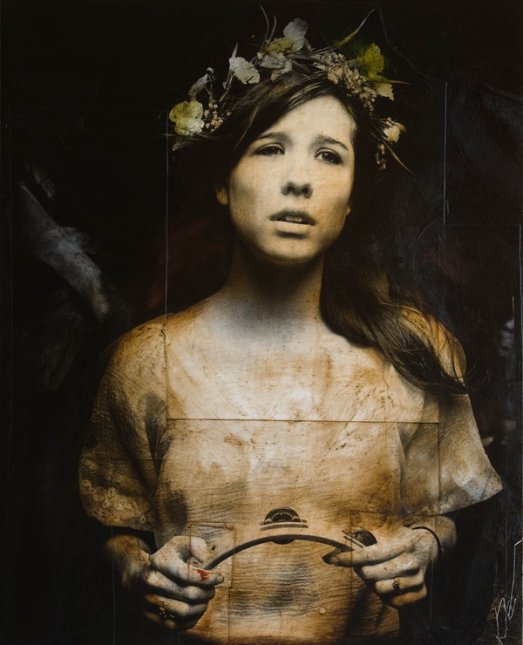 The Slaying of Jephthah’s Daughter

We saw in Part I that Christian apologists insist that Jephthah did not  ritually slaughter his own daughter and offer her up as a burnt-offering to the God of Israel. Instead, apologists maintain, Jephthah’s “sacrifice” was that his daughter was fated to consecrate the rest of her life as an unmarried virgin in full devotion to God. And, consequently, Jephthah to lose the opportunity to carry on the family’s lineage.

Ancient Jewish writers, however, had no doubt the sacrifice was  carried out as Jephthah vowed it would. Thus, everything rests on the precise wording of verses 11:30-31; 39 of the Hebrew text of Judges 11.

“The Hebrew text [of Judges 11:31] excludes the possibility of any animal serving as a candidate for this burnt offering since the phrase rendered “whatsoever [actually “whoever”] cometh forth of the doors of my house is never used of an animal.”[4]

Even Keil & Delitzsch state, “The words “he did to her his vow which he had vowed,” cannot be understood in any other way than that he offered her as עולה , i.e., as a burnt-offering, to the Lord.”

“Attempts have been made to show that Jephthah had an animal sacrifice in mind and that he was taken by surprise when his daughter came out to greet him; but these cannot be substantiated, since the designation, whoever comes forth from the doors of my house must refer to an intended human sacrifice.”[5]

And so when reading Judges 11:39, “And after two months, she returned to her father, and he [Jephthah] did to her as he had vowed,” it indicates she was, indeed, sacrificed up as a burnt offering. And that’s, that. End of story. Right?

After stating that the Hebrew “whatever” [“אֲשֶׁר“ (“ă-šer”)] of Judges 11:31 could not possibly mean an animal, Gleason L. Archer then tries to save the situation by writing:

“It would have been altogether unthinkable for Jephthah or any other Israelite to imagine he could please God by committing such a heinous and abhorrent abomination in His presence or at His altar.”[6]

Archer and a slew of Christian apologists then cite those verses where God condemns human sacrifice.[7] Then, there’s that odd request that Jephthah’s daughter be allowed two months for her and her friends roam the hills of her homeland to bewail that she would die an unmarried virgin.

Christian apologists have pounced on this as evidence that Jephthah did not  put his daughter to death. Dave Miller (PhD.) of the website Apologetics Press.org  resorts to explaining away the problem using like arguments found on any number of apologist sites:

Yet another explanation is that Jephthah’s “sacrifice” was a “spiritual” one only. We read in Keil & Delitzsch’s Commentary on the Old Testament:

“All these circumstances (i.e., that human sacrifice was an abomination to God), when rightly considered, almost compel us to adopt the spiritual interpretation of the words “offer as a burnt-offering.” [Yet] it is true that no exactly corresponding parallelisms can be adduced from the Old Testament in support of the spiritual view.”[9]

A Further Rebuttal to the Apologists

Christian apologist websites dealing with the embarrassing episode of Jephthah’s daughter take great pains to emphasize how human sacrifice is an unparalleled abomination in the eyes of God. Verses taken from the books of Leviticus and Deuteronomy are routinely listed to “prove” the ritual slaughter of Jephthah’s daughter would have been unacceptable to God.

But Christians seem to forget that God Himself ordered Abraham to ritually murder his son Isaac and offer him up as a burnt-offering (Genesis 22:1-13). 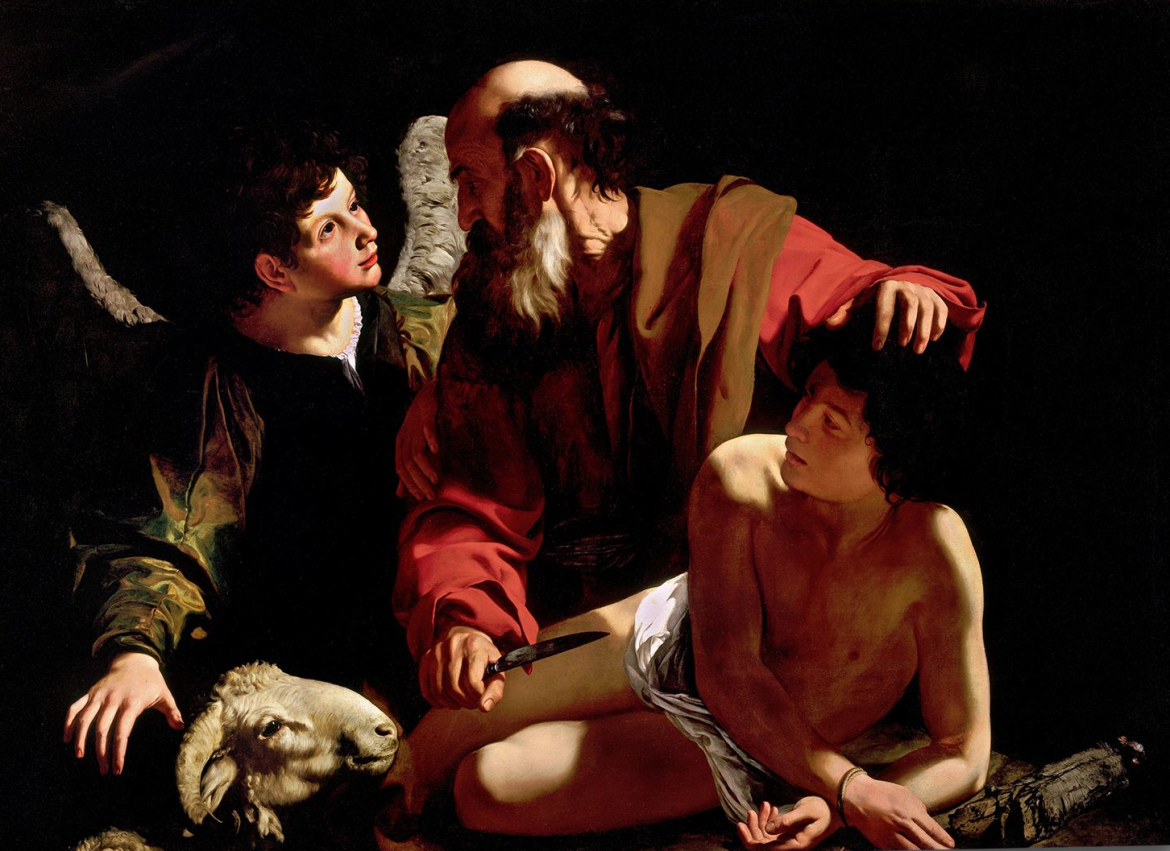 Yes, God had an angel stay Abraham’s knife-wielding hand at the last second. But Abraham was compelled to cruelly  go through with the sacrifice not knowing his hand would  be stayed. In the case of Jephthah’s daughter, God could have chosen to do the very same thing but, astonishingly, chose not  to.

If God saw no problem compelling Abraham to offer up Isaac to ritual slaughter, one can hardly be surprised by Jephthah’s sacrifice

A further fact has to be taken into consideration: the episode of Jephthah’s daughter took place at a very early time in Israelite history; at a time when the Israelites worshiped a variety of gods and not just Yahweh exclusively. Gods like Baal and Molech/Moloch were apparently widely worshiped and “honored” through the use of ritual child sacrifice. That is, until Yahwism eventually supplanted all pagan religions.

One comes away  naturally thinking Yahweh could have simply taught Jephthah a lesson by having him endure the thought of having to ritually slaughter, proceed to do so, but then stay Jephthah’s hand as was done in Abraham’s case. But that, Yahweh choose not to do. And nowhere in Judges 11 does it definitively state Jephthah’s daughter was not  slain.

The “bottom line” is rather obvious. Jephthah did  sacrifice his daughter as he had vowed. The Hebrew text leaves practically no doubt about it. It’s just that Christians find the thought of Jephthah slaughtering his own daughter too objectionable a thought to believe true. But that was then and how sacred vows were carried out in those very early days. Jephthah and his sacrifice must be judged by ancient standards, not a modern one.

4 thoughts on “Jephthah’s Daughter: A Bible Story of God and Human Sacrifice – The Conclusion”