The Two Mary’s, An Angel, and Jesus

Mary Magdalene is now breathlessly reporting all that she had seen and heard at Jesus’ tomb to the disciples in Jerusalem (cf. John 20:18). And it is here that she happens upon friend and fellow disciple, “the other Mary.” Together, they decide that yet another  visit to the tomb is in order and quickly prepare for the return trip; this marking the 3rd  visit by Mary Magdalene within the span of a mere hour  or so―that’s if  we were to rely on the combined gospel reports!

It is still the pre-dawn when the two Mary’s arrive (Matthew 28:1)), and after a violent earthquake has just erupted.

But note that it was after  the sun arose when the women arrived, according to  Mark16:2!

An angel has come down from heaven and has rolled back the entrance stone to Jesus’ tomb (which had somehow  been rolled back  into place)! That missing Roman guard has now finally materialized and stationed at the tomb entrance―though shocked out of their senses as a result of witnessing a “real” angel roll back the entrance stone; so much so that they have become like “dead men” (Matthew 28:4). 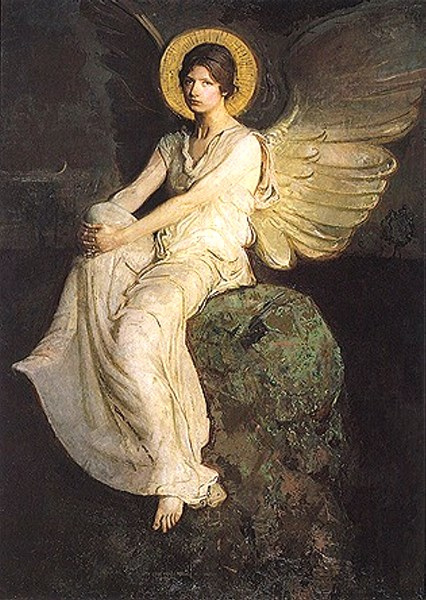 “And behold, there was a great earthquake; for an angel of the Lord descended from heaven and came and rolled back the stone and sat upon it.  (Matthew 28:2; RSV; emphasis mine)

This now third  angel (following the two that appeared inside the tomb earlier in John’s gospel)  knows that the two Mary’s are looking for Jesus. Yet, in spite of all that has already transpired in John’s gospel, proceeds to tells Mary Magdalene precisely what she already  knows: that Jesus has risen from the dead!

(Clearly, the telepathic communication system employed by imaginary God and His imaginary angels back in the “day” was simply not as “reliable” as it is today.)

But what happens next is simply astounding. The angel gets up off the stone and escorts the two Mary’s to Jesus’ tomb. It is only now that Mary Magdalene is made aware that Jesus’ body is missing, according to Matthew’s gospel! Contrast this with John’s account (20:1-18), and the Christian fundamentalist has problems.

By now, it should be rather obvious that the author of “Matthew’s” Gospel knew nothing  of Mary Magdalene’s pre-dawn visit to the tomb as recorded in the Gospel of John. But, more striking is the fact that Jesus’ imminent death and resurrection was a “talking point” Jesus himself repeatedly  stressed to his disciples (cf. Matthew 16:21-28; Mark 8:31; Luke 9:21-22; and parallels). Therefore, is it not incredibly odd that not one disciple is depicted as anticipating Jesus’ imminent return from the dead? Not a single one!

How is one to explain this?

Moreover, it is only now  dawn Sunday. Jesus underwent the resurrection quite some time earlier. Ergo, we have Jesus’ “rising’ actually occurring prior  to only the second “dawn.”

But Jesus himself  “prophesied” the Resurrection would occur on the fourth day in Mark 9:31:

“He [Jesus] said to them,”” the Son of Man is going to be delivered into the hands of men,. They will kill him, and  after three days he will rise.”
(Emphasis mine, NIV)

and, by inference, Jesus again in Matthew 12:40 where Jesus God declares he will remain in the heart of the earth for “three days AND three nights,” thus equaling the fourth  day. (See also Matthew 27:63.) This being the case, one would assume that the disciples were already  fully, and gleefully prepared for Jesus’ return from the dead.

Should we assume that the disciples were truly dim-witted beyond all belief? Or, could it be that the disciples never really  believed Jesus after all?  Even after  witnessing the multitude of “miracles” he is said to have performed right before their very eyes?